One of the best places to get sushi in Dallas. Definitely the best sushi restaurant in Deep Ellum
Review for Stackhouse by Nicholas
Rating:

Stackhouse is definitely once of the best restaurants in Dallas and Deep Ellum. Has a really cool rooftop bar in Dallas too
Review for Deep Sushi by Princess
Rating:

This sushi house in Dallas is a must try! Will definitely come back.
Review for Peggy Sue BBQ by Princess
Rating:

Peggy Sue BBQ is one of the best barbecue restaurants in Dallas. I will definitely visit again soon!
Review for Big Dollar Mart by Wojciech
Rating:

Nightlife in Deep Ellum View All 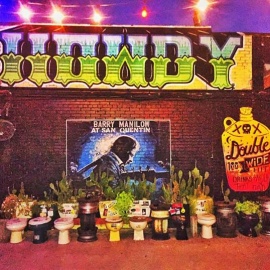 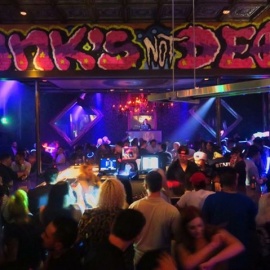 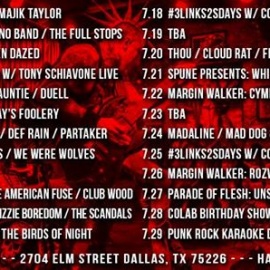 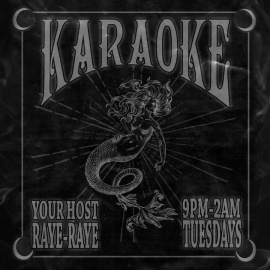 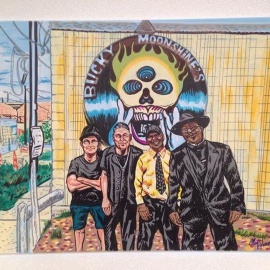 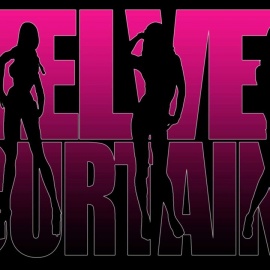 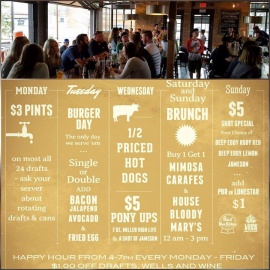 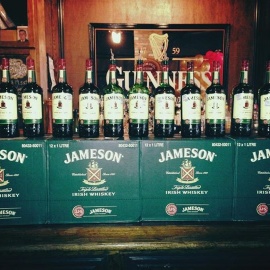 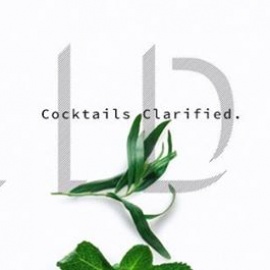 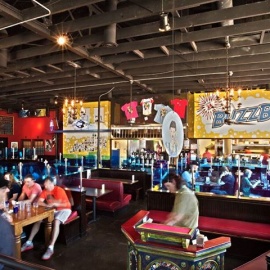 Restaurants in Deep Ellum View All 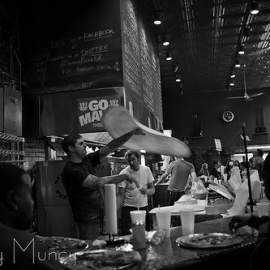 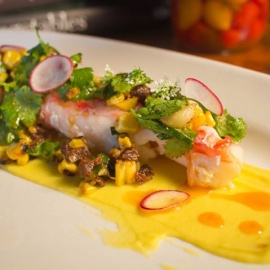 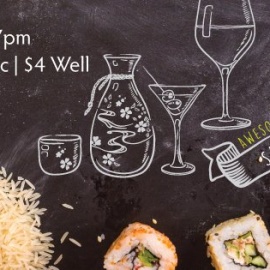 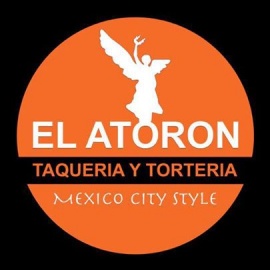 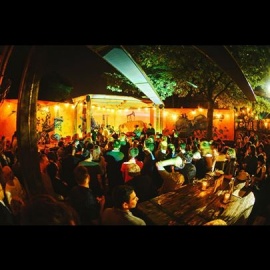 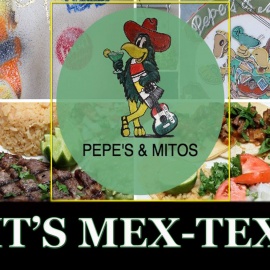 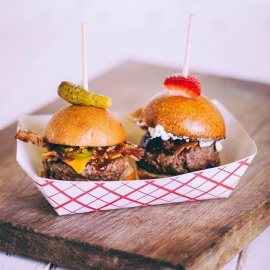 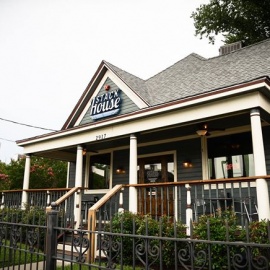 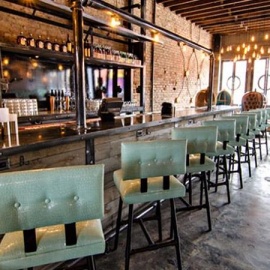 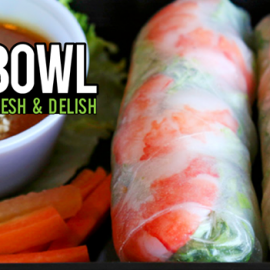 Shopping in Deep Ellum View All 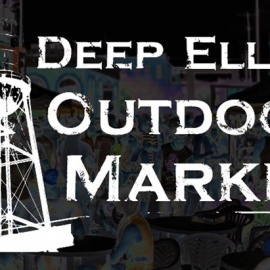 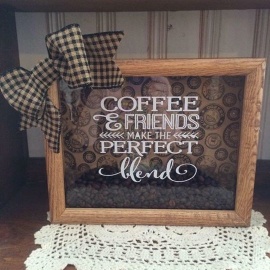 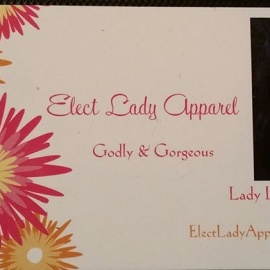 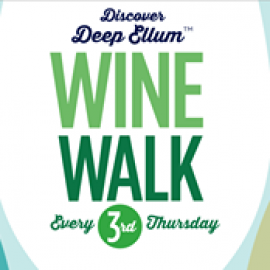 Deep Ellum is the hip up-and-coming renovated district just east of downtown Dallas. The streets are lined with New York-style lofts and transformed warehouses that create a bold and entertaining atmosphere for everyone. This area is well-known for arts and entertainment. Many popular bands have performed here, including The Dead Kennedys, The Flaming Lips, The Red Hot Chili Peppers, Black Flag and much more. Music ranging from jazz, blues, alternative rock and even Latin samba can be found in Ellum. Large buildings in this old industrial neighborhood have been transformed into clubs and lounges for the musically inspired and party people looking for a good time. Cover charges tend to be much smaller here since they the district prides itself on being extremely influential in music and pop culture as we know it. Unique shops, art exhibits, theaters and food are also found almost everywhere in the area. The Hub Theater, like many in the area, has frequent local performances with imaginative twists on classic plays. Local artists are also promoted in many of the surrounding galleries such as The Public Trust or Gallery 2910. However, because live music venues seem to be the most popular and frequent places to find, an entertaining evening is always only a few short blocks away. Creativity spawns in Deep Ellum, so finding inventive and original art, food, performances, music and more, is easily done here.

Feeling Hungry? The 10 Best Restaurants in Dallas You Must Visit in 2023

Dallas's culinary scene is soaring and bustling with all the exciting restaurant options in the city. If youâre wondering which street to hit on your next food endeavor, we have the best options for...

Anyone who has been to Dallas can attest that it is one of the best cities to visit. It boasts beautiful museums, is home to Dallas Cowboys games, has a bustlin

Where To Watch The National College Football Championship in Dallas

If you're looking for where to watch the college football playoff national championship game in Dallas, this guide is free to use. With several sports bars and&n

Drink-Cember, Isn't It! Here are the Best Bars with Holiday Drinks in Dallas

The holiday season is hitting just right! Restaurants are ready to serve you a delicious Christmas buffet, and bars have a line-up of drinks for

Dallas has some of the best Halloween events and parties in Texas. Weâve compiled a bucket list for you to enjoy at any age in the Dallas Area. Whether you are looking for a family-friendly event...

Where To Eat Chicken and Waffles in Dallas

Dallas is known for its love of chicken and waffles, especially when it is served up fancy and at a trendy restaurant. These places should be able to provide you with that perfect pairing of crunchy fried...

Boos or Booze? The Hottest Halloween Bar Crawls in Dallas

Planning to indulge in some adult fun the coming Halloween weekend in Dallas? If yes, youâre at the right spot.  This 214 guide lists the most-awaited Halloween pu

Where To Eat on Halloween in Dallas

Halloween week in Dallas is coming and you have two options to choose from, either go all out and attend every food-related monster bash available or skip the shenanigans and eat

The Best Coffee Shops in Dallas: 4 Gems To Start Your Day

Dallas is best known for its rodeos, barbeque, and wide-open landscapes. While coffee is low on the list, weâre here to tell coffee aficionados that Dallas coffee deserves reconsideration. Excellent...

Where To Celebrate Oktoberfest in Dallas

In our efforts to create fun drinking gatherings, we've lost the original significance of cultural holidays such as St. Patrick's Day and Cinco de Mayo. However, as Oktoberfest is primarily a beer-drinking...

5 of the Best Dog-Friendly Restaurants and Bars in Dallas

Your furry buddy may need to use the restroom sooner than you do, or they may get anxious while you are on your cell phone. They need a place where they can spend their day out with you comfortably.  Most...

Have you been bored lately? Labor Day in Dallas is here and there are plenty of things to do and ways to fight boredom. With so many La

Things To Do For Father's Day in Dallas

If you're looking for fun things to do for Father's Day in Dallas, you are in luck! This 214area guide has all the best activities that you and Dad can do together for

Bars and Clubs in Dallas with VIP Bottle Service

Feel like a VIP in 2020 at any one of these unique bars and clubs in Dallas offering the most exclusive bottle packages. From karaoke bars to upscale dance clubs, these

15 Fun and Festive Christmas Events and Celebrations in Dallas!

When your heart fills with Holiday Cheer around this time of the year during Christmas in Dallas, what's the first thing you want to do to celebrate? Cuddle up in front of the TV

Begin Your Day With the Best Brunch in Dallas

Brunch should be served every meal. It's everybody's favorite meal on the weekends and can be as delicious as it is wholesome. Brunch in Dallas is almost second nature for weekend fun but these top restaurants...

Things To Do in Dallas This Weekend November 14 - 17

From fall concerts to paint nights, there are so many things to do in Dallas this weekend with such little time. The holidays are right around the corner and finding t

Bars Open on Thanksgiving in Dallas

Thanksgiving in Dallas is a time to be with the family, eat delicious food, and sip some tasty cocktails. If you want to kick your feet up this Thanksgiving and enjoy all the

Best New Year's Eve Parties in Dallas to Ring in 2023

New Yearâs Eve is a time to celebrate the memories of the year before, and turn the page to create more! Celebrate the beginning of 2023 with family and friends at some of the best New Year's Eve parties...

From sports bars to southern restaurants in Dallas, most diners and bars have a take on America's favorite meal, chicken wings. But which of these eateries s

If it's your first time doing yoga, don't be scared! It can look scary but can lead to an increase in flexibility, core strength, mindfulness, and patience. This 5000-year-old practice has helped...

No matter how you take it, everyone loves a juicy burger, but which Dallas restaurant serves the best of the best? You shouldn't have to settle for anything except for the best burgers in Dallas so we brought...

Bars With Live Music in Dallas

Dallas is one of the largest cities in the South and is known for its beautiful skyline, delicious food, hot summers, unique nightlife, and especially its music. With so many musicians coming from...

Stomach rumbling after drinking all night and need some comfort food? Or are you just up late and hungry? Check out the best late-night restaurants in Dallas perfect for anyone looking to nom into the...

Want to drink with the best views of the Dallas skyline? Cheers to the sunset at these rooftop and outdoor bars in Dallas perfect for anyone looking to lo 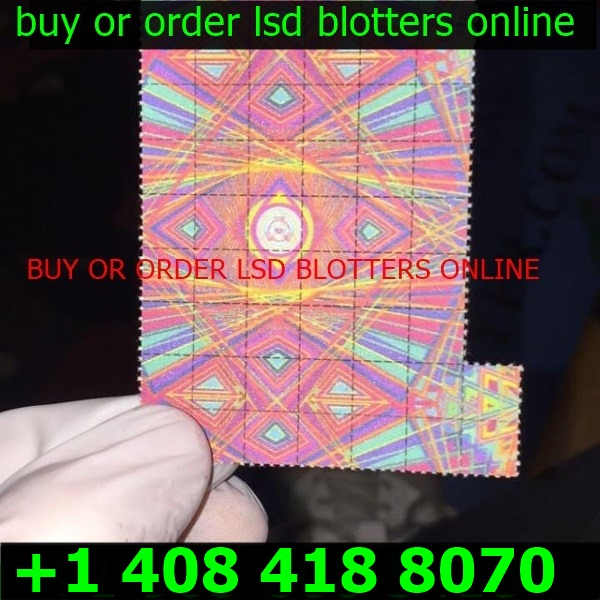 Looking for new furniture for your school, dorms, or office suites? Reach out to the MiEN Design Team today with eco-friendly products ready for you now!